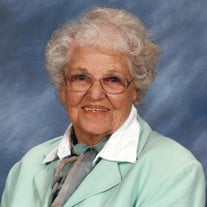 Ruth Swann Claiborne, age 100, passed away peacefully at home August 15, 2021. Ruth was born May 2, 1921 in Knoxville, TN to Samuel and Hilda Swann. She grew up in West Knoxville and graduated from Farragut High School. Ruth went on to meet and marry the love of her life, Vick C. Claiborne, on February 29, 1944. Both worked at Oak Ridge during WWII while the bomb was being built. She was a “Cold War Patriot”. In 1947, they became school bus contractors Knox County Schools. She became one of the first few women bus drivers, and drove for 40 years. Ruth was always active in her church, first at Middlebrook Baptist Church, then joining her sister at Central Baptist Bearden after the death of her husband in 1985. Ruth was preceded in death by her parents, Samuel and Hilda Swann; Husband, Vick C. Claiborne; Brother, Sam Swann; Children, Vicki Dunaway and Ray Claiborne; Sisters, Margaret Duncan and Mary Roberson, as well as several sisters and brothers-in-law. She is survived by her daughter-in-law Peggy Claiborne; Grandchildren, Seth Dunaway (Amy), Amanda Gibson (Stuart), Michael Claiborne (Meredith), and Tyler Claiborne (Erica); great grandchildren Gant Dunaway, Libby Dunaway, and Colbie Claiborne; Special friends Janet Coward, Louise Owens, and all of her Central Bearden Church family. Special thanks to her dear caregivers Anita and Jason Musick, and Jimmy and Daysha Broxson, Ruth’s angels. Also, thanks to Covenant Hospice and Professional Case Management for all of their help and care. A celebration of life will be held at Rose Funeral and Cremation – Mann on Kingston Pike, Knoxville from 5-7 pm Friday, August 20, with Reverend Mark Moreland officiating. A private graveside service to bury Ruth’s ashes will be held at a later date. In lieu of flowers, please make a donation to Central Baptist Bearden, or the charity of your choice. Arrangements by Rose Funeral and Cremation – Mann. Online condolences may be made at rosefuneraltn.com.

Ruth Swann Claiborne, age 100, passed away peacefully at home August 15, 2021. Ruth was born May 2, 1921 in Knoxville, TN to Samuel and Hilda Swann. She grew up in West Knoxville and graduated from Farragut High School. Ruth went on to meet... View Obituary & Service Information

Send flowers to the Claiborne family.