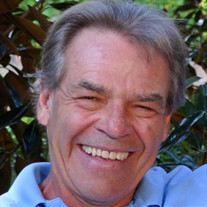 Thomas William Harper, born August 14, 1949, in Blount County, Tennessee, passed away at home on Sunday, May 16, 2021 of Pulmonary Fibrosis. Tom grew up in Pittsburgh, Pennsylvania, and graduated from Mt. Lebanon High School. He returned to East Tennessee to attend the University of Tennessee where he studied industrial engineering and was a proud member of Sigma Alpha Epsilon fraternity. In Oct. 1979 Tom began dating Janet McCampbell, whom he swore he had been in love with since spotting her at the Fountain City Ballpark in 1961. After a whirlwind courtship, he convinced her to marry him, and did so on March 1, 1980 before she could change her mind. Shortly thereafter, Tom established Harper Porsche Audi Jaguar. Tom loved cars all of his life, and channeled that passion into the creation of Harper Auto Square, which encompasses 7 dealerships, 13 franchises, a body shop, and more classic cars than Tom would likely admit to. Tom proudly served as president of the Porsche and Audi Dealer Councils throughout the 1980’s and 90’s. Silent in his constant generosity, Tom loved to help people, especially those in recovery, and was so forgiving of failures. He created a culture at the dealerships that honored relationships above all else, and treated his employees as he did his family, with love and respect. His daughter, Samma Bromley, and son, Shannon Harper, are carrying on the traditions of respect and integrity that Tom created at work and in life. Tom will be remembered for his mastery of April Fools jokes, his love of Eric Clapton, his love for his family, his friendship with Bill W., and his great big smile that lit up the room. Tom was preceded in death by his mother, Samma McCrary Harper, father, John Dickson Harper Sr., and brother, Rodgers McCrary Harper. He is survived by his beloved wife, Janet, his daughter Samma Harper Bromley (Morgan), son Shannon McCrary Harper (Emily), and his five favorite people in the world, Dell Harper (9), Deeds (7) and Tommy Bromley (4), Charlotte (7) and Reynie Harper (5); his brother, John Dickson Harper, II (Caddy); sisters-in-law, Mary M. Bell (John), Trish M. Thompson, Bruce McCampbell (Elaine), Rebecca M. Fenn (Mark) and Rachael McCampbell (Curtis Stewart); many beloved nieces and nephews, as well as his much loved dogs, Dixie and Honey. We are grateful to UT Hospice and to Mary Sowell for making his final days more comfortable. A memorial service led by Dr. Bill Barron and Rev. Mark Lampley will be held at Sequoyah Hills Presbyterian Church at 3:00 PM, on Sunday, May 30th (masks are not required), with reception to follow in Barron Hall. In lieu of flowers, please send donations to the UT Medical Center Maternal Fetal Research Fund. Online memorials may be made by visiting utmedicalcenter.org/give-now/. Arrangements by Rose Funeral and Cremation - Mann. Online condolences may be made at www.rosefuneraltn.com.

Thomas William Harper, born August 14, 1949, in Blount County, Tennessee, passed away at home on Sunday, May 16, 2021 of Pulmonary Fibrosis. Tom grew up in Pittsburgh, Pennsylvania, and graduated from Mt. Lebanon High School. He returned to... View Obituary & Service Information

Send flowers to the Harper family.