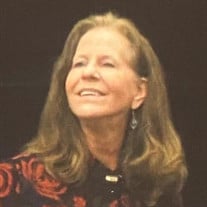 Virginia Alva Kinard, 64, of Knoxville, TN, passed away on Wednesday, January 20, 2021. Born October 23, 1956 in Augusta, GA, she was the daughter of Dr. Garland Eugene “Gene” Kinard and Virginia Murrel Melton. Raised in Chickamauga, GA, Alva cheered on the Trojans of Gordon Lee High School. The “cutest boy (she) had ever seen” rang the doorbell of her family home when she was 12 years old. She married him in 1973, and their son, Jason, was born in 1977. After many years, and life adventures, Alva and Jason settled in Knoxville, TN in 1992. In 2002, she earned an Associate of Applied Science in Office Systems Technology from Pellissippi State Community College. She was a dedicated Property Manager in the Knoxville community. Alva was preceded in death by her father, Dr. Garland Eugene “Gene” Kinard and her brother, Gregory “Greg” Bryan Kinard. Alva is survived by her gracious stepfather and mother, Gordon and Murrel Leonard of Chickamauga, GA; her loving son, Jason and wife, Crystal of Knoxville, TN; two brothers, Jeff Kinard, and wife Cindy, of Rossville, GA, and Jerry Kinard and wife, Tracy of Trenton, GA; two granddaughters, Chloe and Lily of Knoxville, TN; and several nieces and nephews. The family will hold a private memorial service in Chickamauga, GA.

The family of Virginia Alva Kinard created this Life Tributes page to make it easy to share your memories.

Virginia Alva Kinard, 64, of Knoxville, TN, passed away on Wednesday,...

Send flowers to the Kinard family.