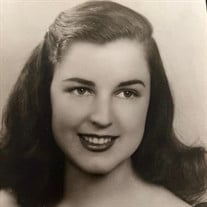 Good and faithful servant Virginia Ann Morris White, of Knoxville, TN, was called home on Sunday, May 1st, 2022, to be with her Heavenly Father. Born to Harold Hanscom Morris and Effie Mae Walker Morris in their home in Carrollton, GA, April 9, 1926, Virginia Ann arrived while a peach tree was in bloom out the window. She and her family moved east to Atlanta about a year later living there until the stock market crashed. About the same time, and under doctor’s orders, her dad developed tuberculosis and they moved west to El Paso, TX for a couple of years to recover. They finally moved back to the East TN area and eventually settled in Knoxville for her early adolescent years. Graduating as a Bobcat from Central HS in Knoxville, Virginia Ann then went on to The University of Tennessee at Knoxville. In three years, she double majored in English and Spanish and graduated in 1944 during WWII. Very active on campus, she was a UT Beauty and was so very proud of her membership as an Alpha Delta Pi Sorority. Following graduation from UT, she went on to work in administration at Oak Ridge National Laboratory where she had top secret clearance. She continued to work there for many years into the Cold War. A woman ahead of her time on many levels. During personal times, she loved cheering for her UT Vols, participating and serving in her church and traveling all over the world. She became involved in a Sunday School class called Miss/Mr. where she met the love of her life, Eugene Duncan White Sr. and they were married on June 23, 1962, remaining so until Gene’s death April 1, 1992. They loved the church and served together in many capacities. At Church Street United Methodist, she (and Gene while living) were members of the Murphy Builder Sunday School class. Also at Church Street, she served as a circle president several times along with serving as leader over all the circles at Church Street at one time. Once widowed, she and a friend started a lunch group for widows that ran for over 25 years to help with the loss of a spouse which helped to support one another in every facet of their lives. She enjoyed traveling, gardening, birds, working with the Red Cross, serving on the board for ETAC learning Center, staying up on current events, politics, the law, a member of the Daughters of the American Revolutionary (DAR) with her daughter, swimming, reading and various activities. Probably her most notable accomplishment was her love and devotion with her son with Down Syndrome and the many organizations she served on his behalf. She and a friend started a special needs group for individuals called “Rocky Top”. She was a fervent advocate and caregiver for Duncan until her death. She leaves behind her daughter Ann Morris White Maggard and son-in-law John D. Maggard of Marietta, GA; her son Eugene Duncan White Jr. of Knoxville, TN; her two grandsons whom she was so proud of Benjamin Maggard and Matthew Maggard both currently at Auburn University; and her nephew Brad Morris of Atlanta, whom she was very fond. A receiving of friends will be held Saturday May 7, 2022, at 1:00 pm - 2:00 pm at Rose Funeral and Cremation - Mann on Kingston Pike with the Funeral Service beginning at 2:00 pm in the chapel. Interment will be at Highland Memorial Cemetery at 3:00 pm. A devoted daughter of Christ, wife, mother, and friend. She will be deeply missed. “We don’t come to stay, but are here to praise, serve and worship.” Any memorial donations can be made to Church Street United Methodist Church, www.churchstreetumc.org or to the Down Syndrome Awareness Group of East Tennessee (DSAG) www.dsagtn.org both non-profit groups. Arrangements by Rose Funeral and Cremation - Mann. Online condolences may be made at rosefuneraltn.com.

Good and faithful servant Virginia Ann Morris White, of Knoxville, TN, was called home on Sunday, May 1st, 2022, to be with her Heavenly Father. Born to Harold Hanscom Morris and Effie Mae Walker Morris in their home in Carrollton, GA, April... View Obituary & Service Information

Send flowers to the White family.