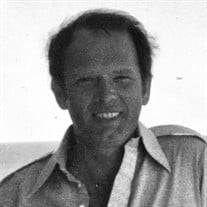 W. Allen Daggett, age 82, of Knoxville, passed away Tuesday, May 1, 2018. Allen Daggett was born on August 26th, 1935 in Kearney, Nebraska to Wayne F. and Lana Zehr Daggett. Allen was a proud graduate of the University of Nebraska where he was the President of the Phi Gamma Delta Fraternity and a faithful Cornhusker’s football fan. Allen had a dry wit and enjoyed making people laugh. He spent his career as an Executive with the JC Penny Company which took him and his family of four children all over the Midwest, with stints in New York, Virginia, and Florida as well. Allen was a man who savored life and understood that it was meant to be lived to the fullest. He was a loyal friend, a loving husband and father, and a proud grandfather to his eight granddaughters. He loved learning and was immensely curious. He spent his retirement having a second career of sorts investing his personal portfolio to great success. Some of his favorite memories were spent sailing the Chesapeake Bay with his wife and friends and yearly trips to Figure 8 Island in North Carolina with his granddaughters. He could usually be found on the golf course or with a cigar and a glass of wine in his hand. He and his wife spent their retirement years in Savannah, Georgia watching the sun go down over the marsh and enjoying time with friends and family. Allen is preceded in death by his beloved wife Judith Hope, his parents, sister Dawn Barger, and son Christopher Jon Daggett. He will be greatly missed by all who had the privilege of knowing him. His family is grateful for every second spent with him and for his patient way of making you feel loved and known when you were with him. Thank you to the wonderful staff at Northshore Senior Living and UT Hospice Care for taking such wonderful care of Allen and for giving his remaining time meaning and dignity. But most of all, thank you Allen for the man that you were, we celebrate your life today with immense gratitude and look forward to the day we will see you again. Allen is survived by his brother Robert, son Scott, daughters Ann Daggett Mashburn (Sid) and Hope Daggett Davis (Scott), and his granddaughters Elizabeth, Meghan, Louisa, Sarah, Daisy, Anna, Harriet, and Pauline. In lieu of flowers, the family requests you consider a donation in Allen’s memory to Alzheimer’s TN. Family and friends will gather at 3pm on Friday, May 4 at The Episcopal Church of the Ascension for a Memorial Service with Receiving of Friends to follow. The Very Reverend Brett Backus officiating.

W. Allen Daggett, age 82, of Knoxville, passed away Tuesday, May 1, 2018. Allen Daggett was born on August 26th, 1935 in Kearney, Nebraska to Wayne F. and Lana Zehr Daggett. Allen was a proud graduate of the University of Nebraska where he... View Obituary & Service Information

The family of W. Allen Daggett created this Life Tributes page to make it easy to share your memories.

Send flowers to the Daggett family.