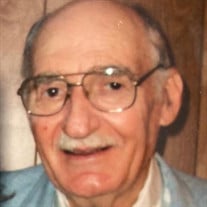 Rev. Walter Lee Hoard, formerly of Everett, PA, went to be with the Lord November 19, 2021, he had been receiving care at the Island Home Park in Knoxville, TN. Walter was born March 16, 1930 in DeSoto, Missouri, the third child to Robert Hoard and Olive (Lee) Hoard. He married Charlene Cimera August 11, 1951. They had five children, Lee Ann Nichols (Brazil), Lenore Hoard (Michigan City, IN.) Nathan Earl Hoard (deceased), Jennifer Searle (Knoxville, TN.), and Jonathan Hoard (Seldovia, AK). They have seventeen grandchildren, twenty-eight great grandchildren and five great-great grandchildren. Walter is also survived by his sister Evelyn Smith of Renton WA. He was preceded in death by his parents, his sister Doris, his brother Elbert, his son Nathan Earl, grandchild Hope Esther Nichols and great-grandchild Adassa Hannah Nichols. Walter was a graduate of Mid-West Bible Institute. He and Charlene dedicated their lives to serving the Lord. Having their start where they met at Pacific Garden Mission in Chicago, Walter preaching and Charlene part of a choral group. Walter helped in starting many churches in the St. Louis area and later was pastor of Chatham Bible Church, Hazelwood, MO ('65-'79), Pines Bible Church, Michigan City, IN. ('80-'87), and Pennwood Bible Church, Everett, PA ('87-'97). Following his retirement he worked as interim pastor of several churches in the south-central Pennsylvania area. He also started and ran Faith Bible Institute. Walter dearly loved his wife of seventy years, who was his true partner and supporter in all things. They worked together to raise their children in the fear and admonition of the Lord. The impact of his life is sprinkled throughout the world in lives touch by his thoughtful caring ministry and desire to see the lost brought to a saving knowledge of Jesus Christ. A viewing will be held November 27th from 2pm till 3 pm with a 3 pm service at the Rose Funeral Home, Knoxville, TN. Internment December 4th at Pennwood Bible Church, Everett PA. Condolences may be sent to Charlene Hoard: 10520 Waterville Lane. Apt. 129, Knoxville TN. 37932. In lieu of flowers, donations may be made in Walter's name to Pennwood Bible Church (Everett, PA), Pines Bible Church (Michigan City, IN), Chatham Bible Church, Hazelwood, MO) or to a charity for Parkinson's research.

Rev. Walter Lee Hoard, formerly of Everett, PA, went to be with the Lord November 19, 2021, he had been receiving care at the Island Home Park in Knoxville, TN. Walter was born March 16, 1930 in DeSoto, Missouri, the third child to Robert... View Obituary & Service Information

The family of Rev. Walter Lee Hoard created this Life Tributes page to make it easy to share your memories.

Rev. Walter Lee Hoard, formerly of Everett, PA, went to be with...

Send flowers to the Hoard family.