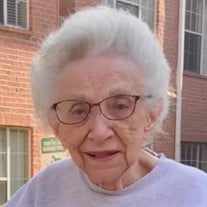 Wilma I. Smith, 91, passed away on January 17, 2022 in Memphis, TN. Wilma was born on December 29, 1930 in Pekin, Indiana to the late Ira and Josephine Geffs. Wilma attended Indiana University where she received her teaching degree. After retiring from teaching, she began working alongside her husband, Charles Smith (1925-2011) in the family-owned business, AAAA Paint Supply Company. Wilma attended the Laurel Church of Christ for many years until her move to Memphis, TN where she passed. Wilma married Charles Smith in 1957. She would quickly tell you that Charles was the love of her life and she loved everyday she had with him. She also loved being a mother, grandmother and great-grandmother. Her children count it an honor and privilege to have called her “mom.” Our memories of her love and care for us will carry us until we are reunited with her again in Heaven. Wilma was preceded in death by her husband, Charles, her parents, Ira and Josephine Geffs, her sister, Mildred Pierson, a son, Jerry Wayne Smith, and two grandchildren, Tony Woods and Jamie Smith. Wilma leaves a host of family and friends that celebrate her victory in Christ but will miss her daily. Wilma and Charles’ three children, Steve and Melea Smith of Knoxville, TN, Scott and Vicki Smith of Knoxville, TN and David and Theresa Jordan of Memphis, TN will miss her greatly. Her children through love, Charlene Zick of Kissimmee, FL and Dianne and Chuck Ingram of Fowlerville, MI also mourn her loss. Wilma also leaves behind 18 grandchildren and 18 great-grandchildren. The family will receive friends at Rose Funeral and Cremation – Mann, 6200 Kingston Pike, Knoxville, TN 37919 on Saturday, January 22 from 12:30 pm to 2:00 pm. A Graveside Service will be held at Sherwood Memorial Gardens at 3:00 pm. Anyone wishing to join the family for the service is welcome. Memorial donations can be made to the Laurel Church of Christ in Knoxville, TN or In Search of the Lords Way (PO Box 371, Edmond, OK 7308). Online condolences may be made at rosefuneraltn.com.

Wilma I. Smith, 91, passed away on January 17, 2022 in Memphis, TN. Wilma was born on December 29, 1930 in Pekin, Indiana to the late Ira and Josephine Geffs. Wilma attended Indiana University where she received her teaching degree. After retiring... View Obituary & Service Information

The family of Wilma I. Smith created this Life Tributes page to make it easy to share your memories.

Send flowers to the Smith family.